@bfd_diplomacy is an unusual twitter handle for an IT geek, but then again, when you understand that the diplomacy bit is the boardgame Diplomacy (and a lot of the people who still play this are in IT it seems) then you might get it. Anyway, in an attempt to step away from the recent IT frenzy, both at work and in the #vDM30in30 challenge, I’m away for the weekend as a member of the organising committee of MidCon which is “A Boardgame Convention in a Posh Hotel” in the middle of the UK.

I played a few “family” games as a young kid and moved on to Games Workshop stuff and RPG’s in my teens, going as far as to own a game called Diplomacy, which a few of us attempted to play on a number of occasions, but I don’t think any of them ever finished. There was a flyer in the box that I owned which mentioned playing by post and so on, but I never got into that. Fast forward in to the world of work and during one DR test we ended up playing a game of Escape from Colditz to fill the time spent waiting for physical servers to restore from tape (as you can  guess, this is going back a bit now). As we were reminiscing about other games we used to play back in the analog days, my IT Director suggested a game of Diplomacy for another time. Interesting! this throwaway comment renewed my interest in a game I’d not played for a while. By this time of course, what was once the postal hobby had moved online, so I was able to have a crack at that and I was soon embroiled in quite a few games. With this being the internet, as soon as someone had a bad time or real life got in the way, they’d quit the game, so games would sometimes stall for months whilst replacements were sought. Unsatisfactory.

Another search online back in 2008 revealed that people played this things face to face at game conventions and the one I found first (ManorCon) was held in Leicester, only 15 minutes from my parents, so, I planned to stay with them and go see what Diplomacy up close and personal was all about. If I hated it, I could vanish almost without trace. First game, I got battered, but I loved it. I also saw people playing a whole load of other games that I’d never seen before. Never one to do something by halves I bought one, called Railroad Tycoon. Mainly cos I knew the computer game. but partly cos it was in the biggest box I’d ever seen.

Diplomacy’s a 50 year old 7 player game, which takes hours to play generally. The idea is that each player is one of the 7 great powers in Europe in 1901. The board is a map of Europe split into a bunch of land and sea spaces, some of the land spaces have the ability to support a military unit (these spaces are called supply centres). You start out with a small force, typically 2 armies and a fleet. To win, you need to control 18 of the 34 supply centres in Europe (or often just more than anyone else when time runs out). This might sound a little like the game “Risk” which a lot of folks know. The twist is that all players submit orders which are processed simultaneously and any conflicts between units are decided by the numbers of units involved, not by dice rolls. Before each order phase, you negotiate with other players, offering to help them, sharing information, lying to their face, whatever you want. After every 2 moves, you count up who owns what and if you own more supply centres than units you can build more at home. The converse is also true, so some players may end up removing units. That’s the basics of it. The Zen summary of this being that as one of the 7 people involved, you play the other 6 pieces around the board, rather than the pieces on it. 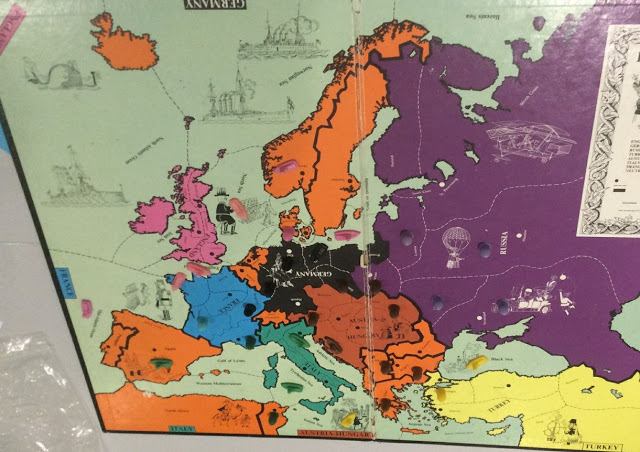 Sorry about the garish Diplomacy board

Since my first trip to a Con, as these things are generally called, I’ve become a mainstay on the UK Diplomacy scene, organised a UK Diplomacy “Tour of Britain”, been UK Champion, competed abroad at European Championships and World Championships (been European Grand Prix Champion and World Team Champion) and so on. I brought the European Diplomacy Championship to the UK in 2011 and to facilitate that, got invited onto the Committee of the convention it was going to run at. I’ve been on that committee here at MidCon ever since, which brings us to today - day one of a whole weekend of games, beer, staying up late etc.

Lots of other games get played at MidCon too, Diplomacy is now merely a sideline. The website I’ve linked to a couple of times above, BoardGameGeek, will tell you more than you could ever hope to know. 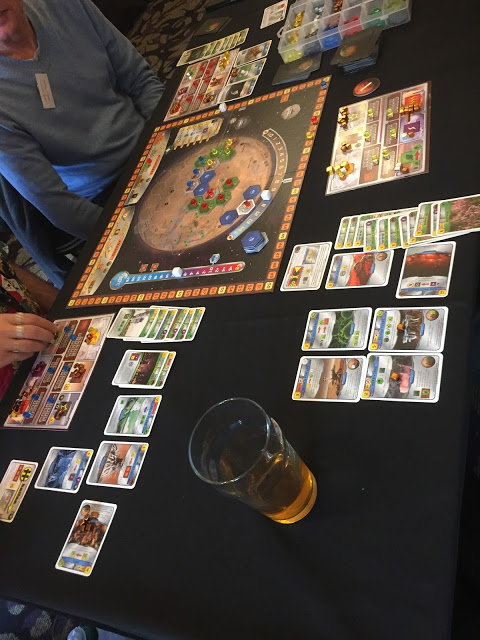