It’s a triple point Tuesday (well, it was when I wrote this and it’s OK, they are all triple point Tuesdays) so what better day to take a look at CloudCred and see what it’s all about? This is another post as part of the vDM30in30 series that I am trying to keep up with.

CloudCred was launched by VMware early in 2013 as a learning site, with a pretty solid gamification angle to it, which is what a lot of people were doing at the time. Foursquare being another, earlier, example of that approach. You can almost avoid the gaming aspect if you want. CloudCred is a single place to go where new VMware related content is spoon fed to you on a regular basis.

Want to know more? Read on!

The premise behind all of this this is that you perform tasks for points. The tasks can be as simple as follow a particular person or organisation on twitter and submit a screenshot to prove it, through reading whitepapers or watching videos and answering questions on the content, taking Hands on Labs, contributing CloudCred tasks, preparing for exams, right up to presenting at a VMUG, appearing on a podcast, passing a certification, writing a book and even things like giving time or money to charitable causes. In short, learn something or contribute to the community, prove it, earn points. Simple.

A lot of the tasks are quick to complete, some take a whole lot longer to achieve, but then then points awarded reflect that. You can earn anything from 10 to 1000 points for completing a task successfully, with less awarded if you don’t get everything right. This arbirtary number means very little on it’s own, but you’ll see more on this shortly.

So you’ve earned a whole bunch of points, well, what do points mean? Prizes! Yep, earn enough points by performing enough tasks and you go up the leaderboards. You can also earn badges to show a level of expertise or effort in a particular area of competency (i.e. Cloud, VMUG, VMworld, Twitter, and many more). You can compete with other folks if you want, contribute to a team effort if you want, gain “prestige”levels if you want, there’s plenty to do. The prestige part is where your hard earned points have reached a cap of 20,000. You can stay there, or you can in effect level up, which resets your points count to zero, resets a cap on some repeatable tasks so you can do them again, increments your Prestige level and may also reward you with something tangible, be that a mobile charger, a  T-Shirt, that sort of thing.

I mentioned Hands on Labs before. well, CloudCred ties up with Hands on Labs at events like the online vForums or VMworld and offers additional fun and games there, different contests, different prizes, some are quite substantial. But mainly, once again, the point is that you learn something and have fun doing it.

The team angle? You can avoid it if you want, or you can take part in the default team you get placed in, join another existing team or even rally your friends to a team that you have formed yourself. Each individual task you complete also rewards your team with a fraction of those points, additional Team tasks can only be carried out when you are in a team over a certain size and require a number of team members to do the same task in a relatively short period of time. This needs co-ordination and there is a team messaging facility to assist you. This social aspect is another positive, you can make new friends and you are also encouraged to meet them, as you can earn points for that too. 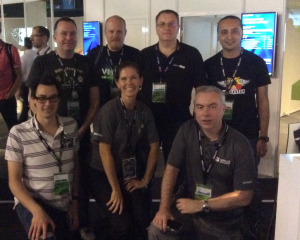 I’m on the LonVMUG team that you can see represented above. I’m an occasional CloudCred dabbler but we have some monster contributors on board, so we’re doing OK, thanks very much!

If words aren’t really your thing, there’s also sound and pictures - you can see an early promo video on youtube here. But, before you go, there’s a lot to like about CloudCred and a lot to learn there. It has more value than looking at another picture of a cat in a box or other similar stuff on Facething or Instawotsit. Go take a look.